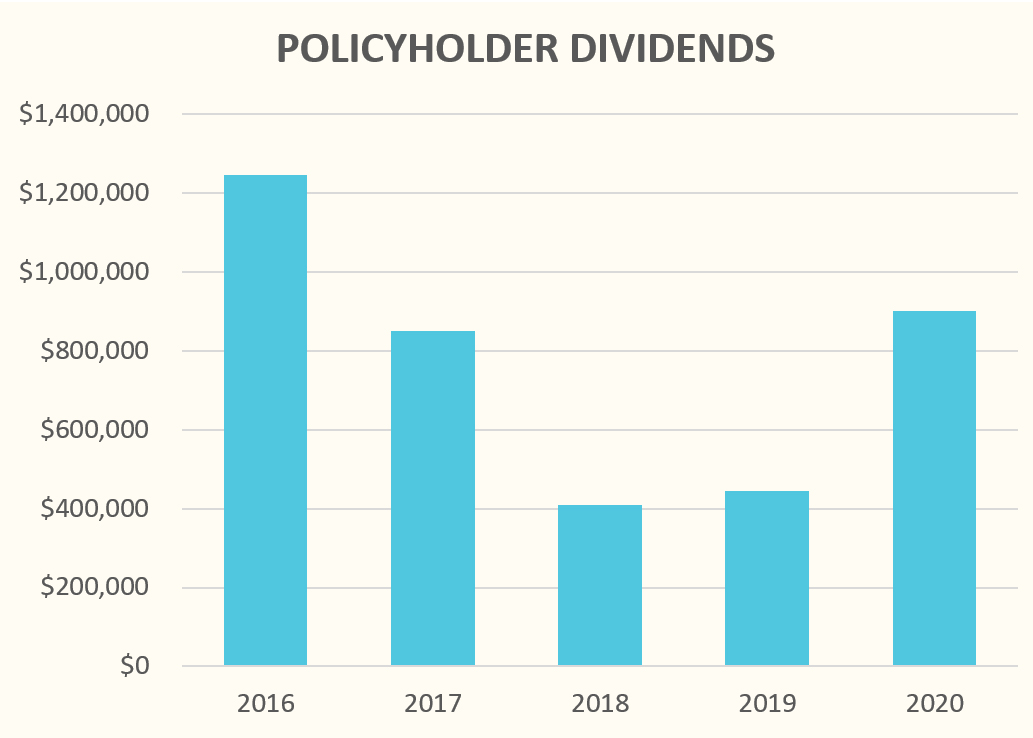 I am sure the favorite envelope you receive from us has to be the one containing the policy dividend check. In all honesty, it is our favorite one to send because it means we had something left in which to share with you, recognizing your efforts that made it possible.

What a crazy year 2020 turned out to be. Yet, with all the uncertainty that seemed to grow as the year went on, it turned out to be a very good financial year for OAMIC. It was such a big improvement over the past 4 or so years that it made me question the credibility of the results. Claims were down in number of open claim files and in both the number of new claims and average severity. Was all of this influenced by the days when everyone was “sheltering in place,” or was it influenced by the decrease in client meetings, courthouses being open and fewer legal matters being completed? I am not sure anyone can answer those questions right now, but we will be able to in time.

Dividends declared by the Board of Directors are based largely out of the annual underwriting gain/(loss). What is known as underwriting profit or loss can be thought of as the money made or lost from operations. It does not include investment income and is before any taxes. Financial solvency – as well as high marks from independent rating organizations – depends on sufficient capital base, stable loss reserve development and a profitable long-term trend line that protects capital (also called “policyholder surplus”). As you can see from the following chart, we needed the very profitable underwriting year to turn the tide of a few years of operational losses.

Most important to the health of an insurance company is the policyholder surplus, which most any other business would call “retained earnings.” For the first time ever, OAMIC’s policyholder surplus jumped over $40 million. We have experienced slight but steady growth in this area over several years. In years past, this was aided by investment income. However, we know how potentially volatile and tough it has been on the investment side, especially in the fixed-income area where rates are lower than the normal.

We truly appreciate the opportunity to work for you, our insureds! Thank you for your loyalty and for your trust and confidence. We look forward to continuing to serve you in 2021 and beyond.